END_OF_DOCUMENT_TOKEN_TO_BE_REPLACED

The ENGAGE4X4 rallye suspension, which Olaf Seip is driving with, was developed in 2010 from ENGAGE4X4 and ORAM.  It based on a modified ENGAGE4X4 STEP 3 high perforamance shock absorber, which were originally developed for expedition vehicles. The base suspension is the Defender 90 Expedition Kit. For this purpose hydraulic axle stops at the front and rear axles, a dome strut kit with specially recorded Piggyback high performance dampers STEP 4 (adjustable in compression and rebound) were developed.

Both vehicles are taking part in the Grand Erg marathon rally in four years. Team Seip had to revision the first service of the damper until after the fourth rally and the Baja Saxionia .

The Land Rover specialist 4WARD4X4 realized for the German ski company Black Forest Ski a high quality conversion of a Land Rover Defender 130 2.2 TD4. For this project, vehicle components and accessories of the reputed companies brand ENGAGE4X4 were used. The parts are manufactured in Germany, with a TUV certificate. 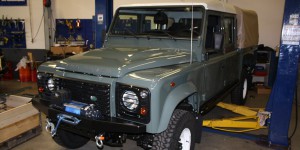 The following components were used for the project conversion Defender 130: